To make a donation to the Parish Offertory Collection, please click here

Welcome to the Parish of St Augustine of Canterbury, Leeds

Within a few years of the opening of St Patrick’s Church in Leeds, the parish started to spread northwards towards the growing suburb of Harehills. A new school-chapel was built here and opened in April 1899.  The chapel continued to be served from St Patrick’s until 1905, when St Augustine’s became an independent parish.

A site for a permanent church fronting Harehills Road was obtained and a temporary church was opened in 1908. After the First World War the presbytery was built at the side of the church.  The foundation stone of the present church was laid in October 1935, and the building was completed in 1936 from designs by Gribbon, Foggitt & Brown of Leeds. The church was designed to accommodate 800 people and was opened by Bishop Poskitt in December 1936, in the presence of the Archbishop of Liverpool. The design was positively received in the architectural press, and the church won the Royal Institute of British Architects bronze medal for 1936.

The church was consecrated in June 1952.

The sanctuary was remodelled by Derek Walker in 1960, with good fittings, including a large mosaic of the Risen Christ designed by Roy Lewis, a graduate of the Royal College of Art. The mosaic came from Italy in numbered square sections, about a foot wide. In 1991 the present marble altar was installed, and this was the work of two sculptor/priests from Italy.

Our Church is now open 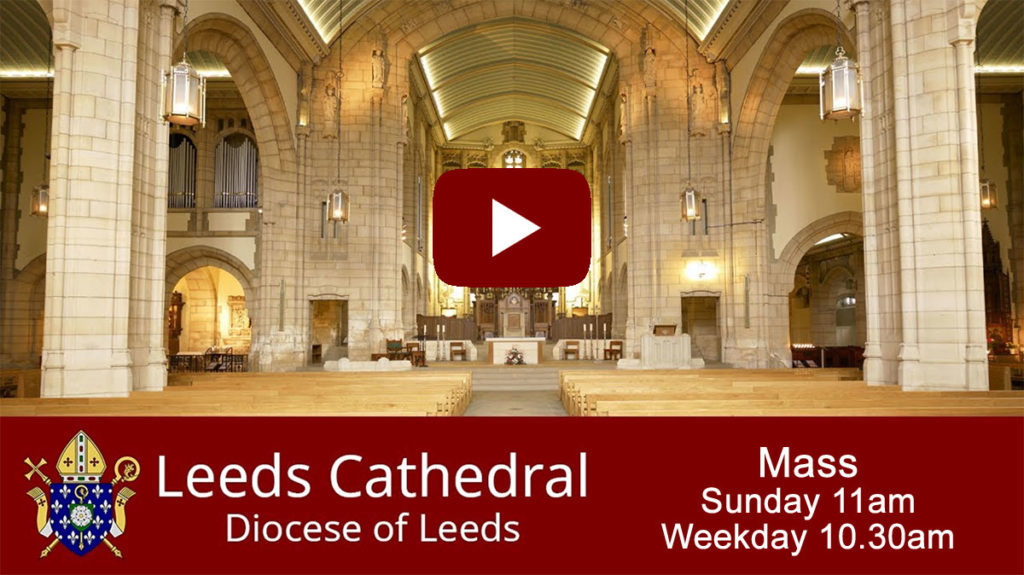 LIVE-STREAMING OF MASS FROM LEEDS CATHEDRAL

SUNDAY MASS is at 11am

WEEKDAY MASSES are usually at 10.30am and the Angelus and Rosary will be prayed at 12.00noon, Monday to Thursday and on Saturday. From Easter Monday 13 April, the anthem Regina Caeli will replace the Angelus at 12.00noon.

The Prayer to make a Spiritual Communion may be downloaded here.